President-elect Carly Robbins gave the invocation.  Brad Mettam presided.  Klark Swan shared that Mardi Gras Fundraiser had been a success.  60 people attended and they made $4500.  The biggest challenge was making gumbo for 120.
County Office of Education representative Melody McGuire accepted a $5000 check for the Science Fair.  There is still time to sign up for The March 23 reforestation project in Lake County.
SPECIAL NOTICE; The April 1 meeting will be off-site and in the evening at Lost Coast Brewery’s Beer tasting site near Piersons.
5:30 pm
.  Beer will be served. Our program was our annual March Madness fund raiser.  Arny King did a great job with a sparse and penurious audience. Jack Reike bought Duke so we know he’ll have at least one winner.
Posted by The Rotary Club of Eureka at 12:54 PM No comments:

The meeting was opened by our president Brad Mettam.  Ziggy Ziggenfuss was called upon to lead the Flag Salute.  In the audience was former member and past president Laurie Lazio.  He said a few words. When he was president he fined Rotarians using a wheel of Fortune you spun to determine what your fine would be.
Klark Swan reminded us of the Mardi Gras fundraiser this Saturday .  Dr.Kim Bauriedel announced that a Tourist Trip to Russia was being offered.  Two weeks in paradise.  Bring your own snowshoes. Next Monday’s meeting is the March Madness fund raiser, so bring your wallet and a detailed knowledge of the skills of 106 college basketball teams.  This year you can buy the 11-16 seeds for $10.  Arny King will be the auctioneer. Blue Ox Millworks was awarded 3250 to build a ramp. The Four-way Fest Rotary District Assembly is being held in Reno at the Pepper Mill May 17-19th.


Our presenter was Erick of Blue Ox Millworks. The topic was the Hearse that Blue OX millworks and a group of volunteers had created for a re-enactment of Abraham Lincoln’s Funeral.  It was built from scratch using the only existing photo of the Hearse and scaling it to make blueprints.  They hand cast aluminum for the hardware and gilded it, and made an exact replica right down to the peacock plumes on the roof.  They then shipped it to Springfield Illinois for the reenactment.  It’s spectacular.  Chuck Ellsworth did the gilding on the horse drawn wagon. 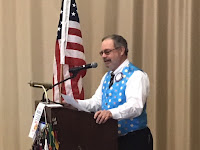 Posted by The Rotary Club of Eureka at 9:09 AM No comments:

President Brad Mettam has returned from his secret mission.  He seems unchanged, at least on the surface. Or maybe it’s unhinged.   He asked Stacy Lane to lead us in the pledge.  Everyone looked around to see if she was actually there.  A rare sighting. Arny King delivered the invocation, saying that what’s there is not all you see-or maybe he said you don’t always see what’s there.  We saw Stacy.
Klark Swan announced that Rotary’s Mardi Gras is Saturday March 16th 6-9pm at the Sequoia Conference Center.  Tickets are $30. They need more donations for a Dutch Raffle.  They could also use some more ingredients for the Gumbo:  shrimp, oysters, possums, garter snakes and anything else that swims, flies, or crawls. The Rotaract Club is celebrating 50 years.  They have a dinner at the Humboldt tap room Tuesday March 12th.Raffle tickets are available. Coincidentally March 10—16 is World Rotaract Week.  A representative from CASA talked about The Spamley Cup- a spam cookoff Sunday April 28th.  Our outgoing Exchange student Estrella is going to Brazil.  She’s making tamales 6 for 15 dollars, 12 for 20.  As a fundraiser. They will be delivered at the next meeting.
Our presenter was Cecilia from the Raven Project.  The non- profit serves homeless youth. They provide a place to drop in and get a hot shower and they give out survival supplies.  They are funded by a $200,000 federal grant.  They also received $16,000 from the Sign Smith Fund.  They will supply interns for local businesses and pay their wages in exchange for training.
For those of you that are curious, lunch consisted of turkey slices in stuffing, bratwurst, mashed potatoes, onion rings, and the ubiquitous salad bar. Martha Stewart served the same menu at her last party.   See you next week.
Posted by The Rotary Club of Eureka at 12:29 PM No comments:

Past president Bruce Smith stood in for Brad Mettam, who was out of town. Menu was veal or spaghetti, the usual salad bar, and chocolate mousse for dessert.
Ted Loring was awarded Rotarian of the Week.  He wasn’t there to accept the award.   Klark Swan reminded us that Rotary’s Mardi Gras fundraiser will be held on March 16th at the Redwood Conference Center. She would like to have everyone let her know if they are attending so she can get an idea of how much food to get. There’s a Rotary District Conference happening in Reno May 7-19th. They are calling it The Four Way Fest” Very clever.
Our presenter was Scott Adair, new director of Economic development for Humboldt County.  He looks to expand local businesses by connecting them to sources of funding like the Headwaters Fund.  He’s also looking to bring new industries to the county.  He mentioned the new fish farm planned for Samoa.  They have a theme Prosperity 2018 and are poised for growth.  They organized a trip to a trade show for 21 local businesses which was very successful.  He’s been on the job four months, and his last position was in Salt Lake City Utah.
It’s been raining all week. So carry an umbrella.
Posted by The Rotary Club of Eureka at 3:11 PM No comments:

Brad Mettam had taken the day off.  Carly Robbins, our president-elect, filled in.  Burt Campton gave the invocation.  He quoted the lyrics from “Such a Wonderful world” most notably sung by Louie Armstrong. Rotarian of the week was Rick Littlefield.
There’s a memorial for J. Warren Hockaday on February 23  at 2:30pm.  Dennis Hunter was recognized for being in the TS .  He was involved in the Wednesday dinners planned to fund raise for the Coast Guard during the government shutdown. Klark Swan reminded us of the Rotary fundraiser Mardi Gras on March 15th,  There won’t be a drawing but there will be a Dutch auction.

﻿
Our outbound Exchange student was assigned to Brazil. She’s selling tamales for $20 a dozen as a fundraiser for her trip.  Keith Crossley introduced our newest Paul Harris Fellow Jim Zessa.  He contributed $4,000 to RI.
Our presenter was John O’Connor.  He works for Papa & Barkley a manufacturer of hemp based products.  P& B got its name from the founder’s father who had terminal cancer.  After trying many ineffective salves, he mixed marijuana with coconut oil and came up with an ointment that reduced pain and increased appetite.  He lived another 4 years due to the ointment. Barkley was his dog.  The company has leased the K-Mart building in Eureka and will have 200 employees.  He also makes Epidiolex, a prescription product that reduces seizures in epilepsy patients.


In case you’re hungry the lunch menu was tri-tip or ham slices, mashed potatoes, salad bar and cake.
Posted by The Rotary Club of Eureka at 12:22 PM No comments:

January 28th meeting of the Rotary Club of Eureka.

Brad Mettam presided. Pat Folkins said that there would be a service for J. Warren Hockaday
on March 22nd.  Our Mardi Gras fundraiser  is March 15th 5:30-730 pm at the Sequoia Conference Center.  Dennis Hunter recently celebrated his 40th wedding anniversary.  Nancy Dean has exchange students going to Egypt. Carton Nielsen reminded the club that the District Conference is coming soon.   Our presenter was Melody McGuire of the Humboldt County Offic Of Education.  She is in charge of the Science Fair.  Several students brought their exhibits to the club.  Rotary's contribution of $5,000 allows winners from our science fair to go to Los Angeles and compete on a statewide level..
Posted by The Rotary Club of Eureka at 1:38 PM No comments:

95 YEARS OF EUREKA ROTARY
We all know that the first Rotary Club was organized in Chicago in1905. We may not be aware that club number two was organized in San Francisco  by Manuel Munoz, a salesman by trade, and his friend Homer Wood, a lawyer. Clubs were then organized in Oakland, Seattle and Los Angeles before a rotary club was ever organized on the east coast.

Prior to 1923 there was no club on the North Coast.  The district governor at the time was enthusiastic about starting a club in Eureka.  Our local response was not exactly overwhelming.
The District governor was not to denied, however, and San Francisco Rotarian Leo Lebenbaum came to Eureka in 1922 to manage the brand new Eureka Inn and assisted by past governor Bru Brunier, helped set up an organizational meeting of the 21 charter members on October 10, 1923.

Sad day for our local club.  J Warren Hockaday, long time Rotarian, passed away.  He was loved and respected by all. 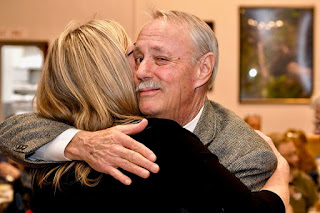 Brad Mettam opened the meeting.  Nathan Nilsen gave the invocation.  The menu included the traditional combination of fried cod and spaghetti.  Dr. Kim made an announcement of the club’s 95th anniversary coming up.  March 15 is the date for the club’s fund raiser Mardi Gras. There will be no cash prize this year.  There will be another party later in the year including a raffle. Edward Jones financial adviser Leslie Wilhelm gave her craft talk. She started her career as a bank teller  in 2015 and moved swiftly to loan officer and then to financial adviser.  She is a native of Port Angeles Washington and has a horse.

Our presenter was Heidi Benzonelli-Burden head of the Jefferson Project.   The former elementary school has been converted to a family resource center, clothing closet, playground, and distributor of free produce.  They are developing a neighborhood network that acts together to clean up the eyesores in the area and reduces crime and raises property values.
Posted by The Rotary Club of Eureka at 9:21 AM No comments:

The Rotary Club of Eureka is part of Rotary International District 5130. District 5130 runs from Napa and Sonoma in the South up to the Oregon border!

**Meetings are on Monday at the Elk's Lodge in Eureka**

Backpack assembly is held during the school year at 4:00pm on Thursdays at Humboldt Moving & Storage on Albee Street in Eureka, between 14th & 15th Streets. For more information, please contact Mindy Bussman.